THIS IS MY LIFE by Professor Chief E. U. Emovon 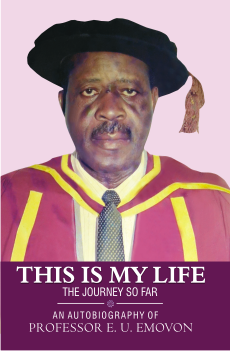 This is an autobiography of Chief (Professor) E. U. Emovon. It tells the story of his life, his achievements, contribution and service to his Country and humanity. It also expresses his views and opinion on some contemporary issues in education and science for development. It is recommended for libraries.

He spent most of his working life in the University system in such appointments as Dean, Faculty of Science, Deputy Vice Chancellor and Vice Chancellor in some Nigerian Ivory Towers.

His public service appointments included member and/or chairman of some Boards, Commissions and Committees at National, State and Local Government levels. The highpoint of his public service was as Minister of Science and Technology under President Ibrahim Badamasi Babangida.

He is a holder of the traditional Chieftaincy title: The Obayangbona of Benin Kingdom and a recipient of the National Honour Award of Commander of the Order of the Niger (CON), Fellow of the Nigerian Academy of Science (FAS) and Justice of the Peace (JP) amongst others.

He is happily married to Princess Adesuwa of the Benin Royal Family and they are blessed with illustrious three daughters and three sons.