THE NEMESIS OF POWER BY Professor P.A. Igbafe 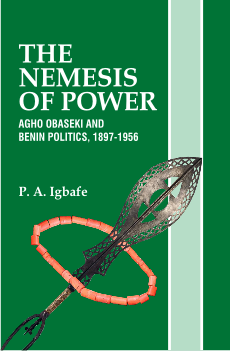 The Nemesis of Power is the story of Agho Obaseki, a dependable, efficient and capable agent of the British who filled the vacuum created as a result of the Oba’s deportation by assuming the leading role among Benin chiefs. Agho’s success based on his sterling qualities as a leader and statesman won him British support but made him numerous enemies amongst Benin chiefs.

This account deals with the life and times of Agho Obaseki, a prominent chief, paramount ruler, district head and Iyase of Benin, 1897-1920. The whole spectrum of the times of Agho Obaseki is examined and analysed in sufficient depth to show vividly the factionalism, polarization of the society and the major confrontations between divergent interest groups in colonial Benin. He emerged from the account as a perfect representative of that group of Africans who used the colonial regime to achieve a tenure of power unparalleled in the history of their kingdoms and localities.

Professor P.A. Igbafe graduated in History, University of London in 1961 and obtained his Ph.D degree from the University of Ibadan in 1968. He lectured at Obafemi Awolowo University, Ile-Ife (then University of Ife) 1964-1975. He was appointed Bendel State Commissioner 1975-1978 and appointed Professor of History, University of Benin in 1978. He was an elected member of the National Constitutional Conference 1994-1995. He was made a Fellow of the Historical Society of Nigeria (FHSN) in 2008 and conferred with the national honours award of Member of the Order of the Federal Republic of Nigeria, MFR, in 2011. He has published several books and contributed in various journals.