THE IMPACT OF CORPORATE GOVERNANCE ON THE TIMELINESS OF FINANCIAL REPORTING By IBRAHIM HASSAN DANKWAMBO Ph.D 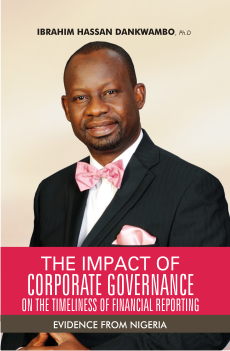 The Impact of Corporate Governance on the Timeliness of Financial Reporting: Evidence from Nigeria, is actually a doctoral thesis report submitted and defended by the author in 2013 at the Igbinedion University, Okada, Nigeria. The study focused on the influence of corporate governance mechanisms and corporate attributes on the timeliness of financial reporting by a sample size of 219 quoted firms on the Nigerian Stock Exchange between 2009-2011 using annual and pooled data. Relevant diagnostic tests such as multicollinearity, heteroscedasticity, autocorrelation, Ramsey mis-specification test and Granger Causality bi-directional relationship tests were conducted in order to eliminate all forms of spurious results. Amongst the findings is that all the firms studied exhibited gross delay in financial reporting; variables determining timeliness of financial reporting in Nigeria at the time of study were highlighted in the empirical work. Read the rest for more information.

Ibrahim Hassan Dankwambo is the current Executive Governor of Gombe State, elected in the 26 April 2011 elections, under the platform of the People’s Democratic Party (PDP).

He graduated from Ahmadu Bello University in 1985 with a degree in Accounting. He obtained a Master of Science degree in Economics from the University of Lagos in 1992 and a PhD in Accounting from Igbinedion University, Okada. He began his career with Coopers & Lybrand in 1985, and worked at the Central Bank of Nigeria from 1988 to 1999. He was then appointed Accountant General of Gombe State, holding this position until 2005. He was appointed Accountant – General of the Federation on 20 April 2005. He held this office until he resigned to start his campaign for election as Governor of Gombe State in January 2011.