Reflections of A NIGERIAN ELECTORAL UMPIRE by Abel I. Guobadia 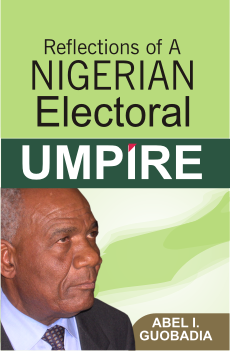 He was appointed the Director of Planning of the National Universities Commission in 1971. The National Universities Commission is the government body established for the co-ordination and management of university education in Nigeria. Abel Guobadia was the acting Executive Secretary of the body for two years before he voluntarily retired from the mainstream civil service in 1983.

Upon his retirement, he was for three years, a commissioner in the former Bendel State of Nigeria and later, Nigeria’s ambassador extraordinary and plenipotentiary to the Republic of Korea from 1987 to 1991. Guobadia has also held a number of part-time appointments as chairman or member of several federal and state boards of parastatals and other government agencies. He was chairman of council and pro-chancellor of the Ambrose Alli University, Ekpoma. His last public appointment was his chairmanship of the Independent National Electoral Commission from May 2000 to May 2005. He is currently the Chairman of the Board of Trustees of Women’s Health and Action Research Council (WHARC), a non-governmental organisation devoted to research and advocacy in women’s reproductive health. Dr Guobadia is happily married with three illustrious sons and a daughter.