PROFILES: Citations on Some Eminent Personalities By Philip A. Igbafe 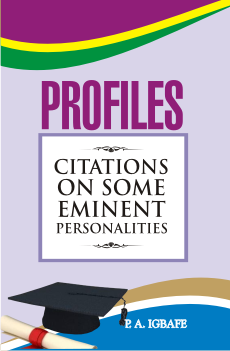 This book is a collection of the citations written by the author between 1980 and 2011 at different times and in different institutions. Many of them were written at the University of Benin between 1980 and 1988 while the second group of citations were written at Benson Idahosa University between 2009 and 2015. Three of the citations were written for Igbinedion University, Okada in 2003. The citations throw into bold relief the lives and the very illustrious careers of some notable and eminent personalities here in Nigeria and abroad. The presentation is characteristically lucid, vivid and in flowing language for which the author has become well-known.

Reading them is exhilarating; the lives of the heroes and heroines come alive in a fashion that is forcefully real.

Philip Aigbona Igbafe, Professor of History and International Studies, University of Benin, Benin City, Nigeria, since 1978 has lectured at various Nigerian universities since 1964. He retired from the University of Benin in 2006 and now lectures at Benson Idahosa University, Benin City. He served as Commissioner for Works and Transport, Bendel State Executive Council 1975 – 1976, and Commissioner for Chieftaincy Affairs and Culture 1976 – 1978. He was a member of the National Constitutional Conference, Abuja where he was the chairman, Committee on Power Sharing 1994 – 1995. He has also served as chairman and member of several boards and corporations at national and state levels. He is the author of Obaseki of Benin (Heinemann, London 1972), Benin under British Administration: The Impact of Colonial Rule on an African Kingdom, 1897 – 1938 (Longman, London, 1979), The Nemesis of Power: Agho Obaseki and Benin Politics 1897-1956 (Macmillan, 1991) revised and reprinted 2016 (Mindex Publishing Company, Benin City). His forthcoming volume is Troubled Times: Politics, Power and Conflicts in Benin, 1991 – 1993. He has also published widely and internationally in numerous books and academic journals.

He is a Fellow of the Historical Society of Nigeria, FHSN and a recipient of the national honour of Member of the Order of the Federal Republic, MFR.