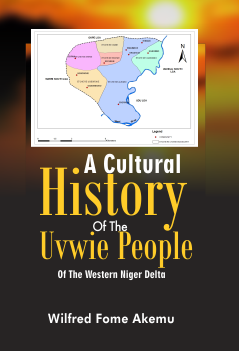 In March 2015, we published on the platform of The Uvwie History Project the book: A History Of The Uvwie People Of The Western Niger Delta by Wilfred Fome Akemu and Gbegbaje – Das I which “is a compendium of the origin, religious worship and resistance to colonialism, traditional, social and economic activities which gave rise to modern developments in Uvwieland”.

The authors of the first book began a process of mining the history of Uvwie. The second book is a continuation of that process. If the first book was a symphony, the second one is a sonata. The latter deals mainly with the culture (the way of life) of the Uvwie people. It peeps into the political, social, economic and technological aspects of culture in the pre-colonial, colonial and post-colonial eras in Uvwieland.

The introduction of British colonialism in the late nineteenth century made Uvwie to become part of modern-day Nigeria which was created by the amalgamation of the Protectorates of Northern and Southern Nigeria in 1914. Since then foreign cultural pins like changes in the system of governance, dress codes, diets, Uvwie traditional architecture, economic activities and language have been inserted in the traditional culture. In response, the Uvwie traditional culture has strived to be assertive, on the one hand, and accepted to be an undercurrent, on the other hand.

Uvwie was a clan until 1954 when it became a Kingdom with the introduction of monarchy and Johnson Ejuvwiekoko Edjekohwo Eruohwo was crowned as Eruphwo II, the Ovie of Uvwie Kingdom on 1st December 1954. Political reforms have also made Uvwie a local government in the Delta State of Nigeria. Uvwie is being governed by the government of Delta State, the Uvwie Local Government, and the Uvwie Monarchy which is responsible for the traditional governance of the Uvwie Kingdom subject to the constitution of Nigeria and other laws.

He was called to the Nigerian Bar in July, 1982. He worked in the University of Lagos as an administrator from 1973 to 1989. He retired from the service of the University of Lagos (as a Principal Assistant Registrar) in August, 1989. He is a co-author of the book: A History Of The Uvwie People Of The Western Niger Delta by Wilfred Fome Akemu and Gbegbaje –Das 1. He is at present engaged in private legal practice and research in community history.